Olympic Opportunities: The Infrastructure State of Play for Brisbane 2032

With Brisbane now confirmed as the host of the 2032 Olympic and Paralympic Games, attention has already turned to the varied infrastructure requirements for the ambitious venture.

The right to host the Games is a fantastic opportunity for Queensland and Australia as a whole, and the 11-year planning phase is the longest that any host nation has ever been afforded.

Olympic Games are renowned for being difficult to deliver on-time and on-budget. The past mistakes of other host nations will no doubt inform our tactics for 2032, and our industry must band together in a big way to deliver the best possible result.

Speaking on the Olympic announcement, Australian Constructors Association CEO Jon Davies stated that we need to think beyond just time and cost considerations.

“The Olympics really gives us the chance to think big and to create a new legacy that will build Queensland’s workforce capability and capacity and innovation. Let’s set skills legacy targets and unleash innovation so we not only deliver high quality infrastructure, but set the construction industry on a more sustainable path.”

It’s well-established that construction will play a leading role in Australia’s economic recovery. Early estimates suggest that 150,000 jobs will be created across south-east Queensland by the Olympics, with a large portion of these in the construction industry.

For our latest blog, we have taken a look at the venue, transport and accommodation plans that are currently being worked on for the 2032 showcase.

A Mix of Purpose-Built and Existing Venues

Practicality and sustainability will be key themes when it comes to the construction of venues for Brisbane 2032. 84 per cent of the venues for the Games are either already built or will be temporary, with events to be hosted across Brisbane as well as the Gold and Sunshine Coasts.

The Gabba will be the Olympic showpiece, hosting athletic events as well as the opening and closing ceremonies. A $1 billion redevelopment and expansion of the ground will increase its capacity from 42,000 to 50,000 spectators.

As for entirely new venues, a 15,000-seat aquatic centre will be built in the Brisbane CBD, while a 10,000-seat gymnastics/boxing arena and a 12,000-seat basketball venue are also in the pipeline.

Take a look at the Brisbane 2032 Master Plan release from the Queensland Government for visual representations of all preliminary plans.

Leaders have acknowledged that significant road and rail improvements will be necessary to host a successful Olympics, with long-term transport infrastructure plans likely to be brought forward to service Brisbane 2032.

By the time the Olympics roll around, the Cross River Rail, Brisbane Metro and Coomera Connector projects will be completed, but there is an expectation that more will be required to support the Games’ operation.

A CityGlider high-frequency bus service to the airport has been mooted to help deal with the influx of travellers, while the Roma Street station precinct is tipped to be the major transport hub for people getting around the city.

Given that the Gold and Sunshine Coasts will be hosting Olympic events, road and rail links between the regions are a high priority. Discussions about heavy rail infrastructure will likely be reignited, while a second M1 between Brisbane and the Gold Coast has been previously discussed.

Whatever decisions are made there is no doubt that long-term practicality will be a key factor, as the south-east Queensland population continues to boom. Efficient transport shapes as one of the most vital considerations for the 2032 Games, and there’s likely to be ample job prospects on offer across a wide spectrum of major projects.

Accommodation and the Athletes’ Village

Northshore Hamilton will be home to more than 10,000 athletes and team representatives when the Games are held, with the waterfront urban area selected for its proximity to the CBD and other event venues, as well as its transport connections.

An artist’s impression of the precinct demonstrates a picturesque home for the athletes on the banks of the Brisbane River. 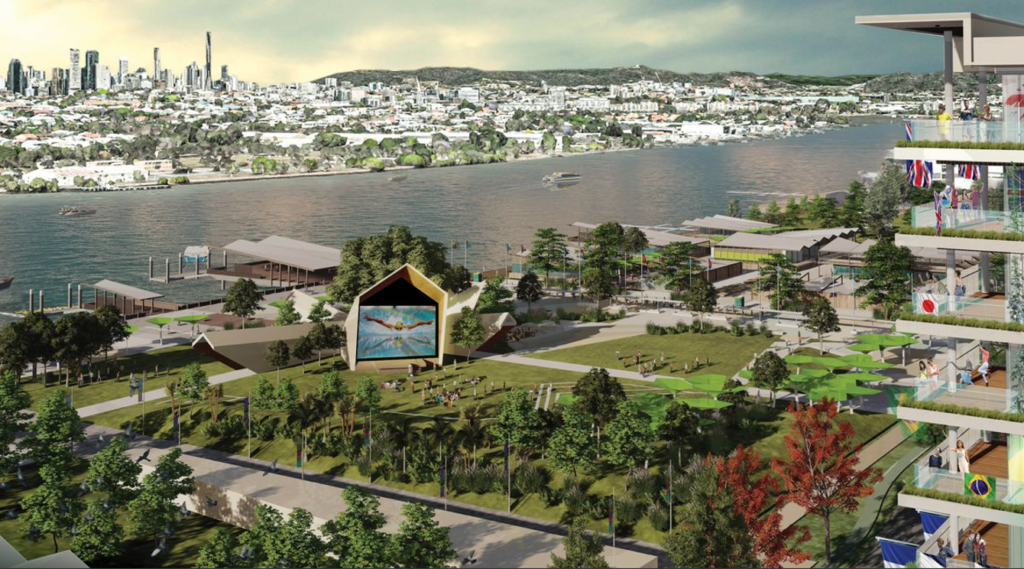 After the Games are completed, the urban area has been earmarked for aged care and retirement living, as well as market accommodation and affordable housing.

A Gold Coast Olympic and Paralympic village is also planned for Robina, with more than 2,600 athletes and officials to be housed there. Alternative options for accommodation are expected to be available on the Sunshine Coast and in Kooralbyn.

The infrastructure described above is just a sample of the confirmed projects that our industry will tackle in coming years, but the Games are sure to generate plenty of indirect opportunities too.

For major projects such as the ones described, the logistic complexity can be significant. Enterprises that have transformed their software suite and digital workflows will be able to make the strongest case when tendering processes begin.

If your enterprise is gearing up to contribute on an infrastructure project, you need look no further than iTWO cx as a flexible software solution. RIB’s intuitive and adaptable construction management software is currently being deployed on major projects across Australia.

To learn more about the potential of our fully web-based collaboration platform, don’t hesitate to contact your local iTWO cx team today!